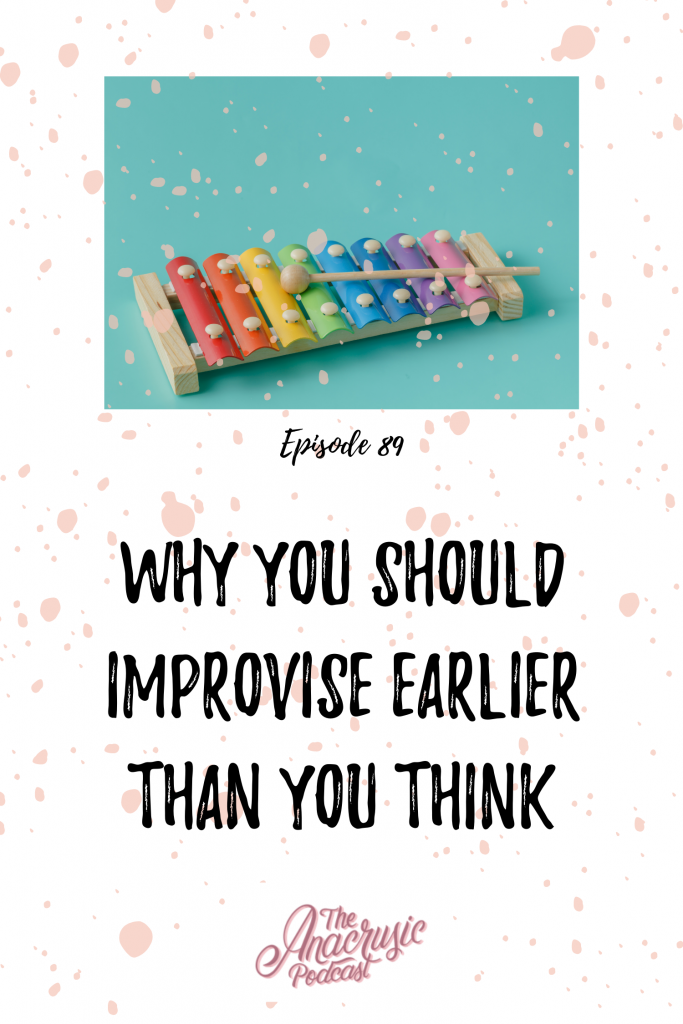 Improvisation must happen early and often. If we want our kids to be able to retain what we’re sharing, if we want to truly build from the known to the unknown—they have to know it! Identify, read, write, and SPEAK.

Today on the podcast we’re talking about improvisation. It’s one of those hairy scary words that honestly makes me kind of freak out. My most prominent memory of improvising, and really the first time I ever had to do it was when I was a junior in college and I was working on a trumpet étude with my lesson teacher and he told me that I needed to learn how to swing. After a couple of lessons of trying to get me to get the feel of this thing, he came to the solution that in order for me to be a more versatile trumpet player,  I needed to play in the jazz lab band.

Now to be completely fair, he wasn’t wrong. I needed to spend some time diversifying myself, because I had very much lived in this straight-laced, follow the rules kind of mentality (which again, shocking I know) and wanted to make sure that someday I would be able to adapt as a performer. (Haha, joke’s on me, I learned that as a teacher more than anywhere else!) So long story short, I enrolled in the lab band. And I loved it. As long as I could read the music. Because, if all those years cramming for my piano lessons the night before taught me anything, it’s that I was a really, really good sight-reader.

So I’m sure you can guess what’s coming next. The day came where it was decided it would be a fun idea to go around the room and everyone would take a turn and improvise. I had absolutely no idea what to do. I froze. And I didn’t freeze out of nerves, or out of being scared, or out of being the odd one out. I froze because I literally had no idea what to do. I had never been asked to improvise before, and this was definitely not the place I was going to fall flat on my face trying something new, when I was otherwise living in a world of perfect excerpts in perfect tune at the perfect tempo.

If only 20-year-old Anne would’ve realized what an amazing lesson that is. 30-something Anne knows it all too well.

Fast forward a few years later and I was sitting in my very first sight singing placement for Kodály levels with my dear solfege teacher and the one of the most brilliant, kindest, and intimidating Hungarian musicians I’ve ever met. They asked if I was comfortable with solfa.

They asked if I could do scale degrees.

They told me to stop and just say “la la la.”

I give that past performance a solid C.

Y’all, I no joke had no idea what I was doing. In that placement, OR when it came to improvising. I could do it on mallet instruments during workshops—as long as I didn’t have to sing it first.

I always say that I wish I would’ve had my Kodály levels in undergrad, simply because of the way I finally understood aural theory.

Now, it’s not fair to say that because I know that my teachers in undergrad were amazing, but I was more interested in rattling off facts on exams and occasionally skipping class to go practice trumpet excerpts than really understand what happens in a musical conversation. (Yes, I realize that there’s about a million cooler things I could’ve been skipping class for. And you better believe I didn’t do it often—I still wanted that gold star of a good grade.) But what a disservice to myself.

It is 100% the combination of the message, the messenger, and the timing that makes things click for us. And I was 100% blessed to have things finally click for me inside of my Kodály levels, early on and often. If only I could apply some of those lessons to the earlier days of my musicianship… what could’ve been possible?

But in the interest of being forward thinking, let’s talk about what all this has to do with what’s possible now, for our students. How can we get them comfortable playing with the different elements of the musical language, instead of being “really good readers” who can’t carry on a conversation?

It’s all through improvisation.

Now, it’s important to note (pun intended) a couple of things: (1) I am not by any means negating the importance of notation. If we are to be fluent in the musical language, it’s imperative that we are literate conversationalists. But the conversation piece is imperative to contextualize the literacy. Therefore, (2) improvisation should happen much earlier in the learning sequence framework than what you might think.

If you aren’t familiar with The Learning Sequence Framework, you can head here to check out my free guide that outlines all the things for you with an example. My entire plan for concept sequencing is beyond the scope of this episode. For the purposes of our chat today, I’m going to really hone in on what I refer to as the “core” teaching phases of the learning sequence framework, exploration, discovery, and extension.

If we were talking exclusively about a Kodály-inspired sequence, we would use the words “prepare-present-practice.” But again, the learning sequence framework is all encompassing of any and all pedagogical approaches, which is why I choose to use different terms. Again, a conversation for another podcast.

Let’s think about how these three phases function with or without notation, starting in the middle. The discovery moment of the learning sequence framework is where you show students how to identify, read, and write musical concepts based on the experience you’ve built in the exploration phase. The extension phase is where students are able to express their independent musicianship by combining the elements of fluency they explored, with the literacy components you led them to discover.

All that to say, extension is where they know how to read and write the stuff. And for me, a lot of times in my elementary music experience as a student back in the day, this is just where we went. No context, no conversation. Y’all, this is why I froze in lab band. I had no aural image of what I should be doing. I had no context for how to even begin. And so I was just stuck.

Further more, I was under the impression, that I needed to know all the chord changes and have the scales and chords written out to reference in order to improvise. So I’d have a vocabulary to arbitrarily pick from when the time was “right.” Still without context or understanding of the musical conversation.

If we’re asking our students to improvise only after they have learned notation, because we assume that’s the answer, we are doing a huge disservice to them. They are being asked to trace the letter, to paint by number, instead of mix the colors or come up with their own words to use. We have to start improvising early and often. And that happens in the exploration phase.

So before we go any further let’s take a minute to define improvisation. And this isn’t Webster’s or the music teacher’s guide to the universe or anything, but this is simply how I define it. Improvisation is playing. It’s when students are given a rhythmic vocabulary from which to draw inspiration and then they are simply making a choice. It doesn’t have to be complicated, it doesn’t have to be fancy, it’s just a spontaneous choice that is contextualized by musical experience in the exploration phase.

So what do I mean by the exploration phase. So quiet literally, it’s where we allow students the opportunity, we facilitate for students the opportunity to be in this rich musical language learning environment. We’re not showing them the formal notation, we’re not talking about it’s “real name,” but we’re contextualizing the role of musical elements through different modes of musical experience, commonly referred to as visual, aural, and kinesthetic. Also, we’re differentiating for ourselves as teacher musicians, and for our student musicians, through various modes of active music making (singing, speech, body percussion, movement, instruments) to reinforce those different modes of musical experience. It’s a lot of stuff! And there’s lots of things to “check off the list” if you will, because it’s important that we are doing that differentiation piece, and that we are allowing for various experiences with aural visual and kinesthetic preparation and exploration. So fit in improvisation? Yes, you must.

Improvisation in the exploration phase is PLAYING

Remember, it’s essential that you let go of any raised on a pedestal feelings you have about what improvisation means, and think about it in it’s simplest terms. Y’all we are teaching small children how to interact with their world. It’s not going to be perfect. It’s going to be perfectly imperfect because they are figuring out this language. They are figuring out the sentence structure, and the syntax, and they need to hear the words and way they work together and try them out and get them wrong and right and wrong again a million times, because that’s how we learn. So allow yourself and your kids the opportunity to play. If you need specific action steps to do so, next week’s podcast is 100% for you, because we’re going to talk explicitly about how improvisation and composition operate on a continuum, where one informs the other.

Improvisation aids in making the discovery moment a moment.

Think about it: if your students have independently improvised and manipulated musical elements through aural, visual, and kinesthetic means (without formal notation) how much context have they built around what you’re about to lead them to? How quickly will it all makes sense where this note lives and whether it’s higher or lower and how it works with the other notes to make a melody? Or for rhythm, they’ve learned through discrimination that these notes are shorter than those and so we have to have more sounds on a beat. And then when you whip out the theory and name the things? It just makes sense. It just clicks.

Let’s just briefly touch on the topic of composition even though I’m going to be sharing with you much more in depth next week on the podcast. If we can redefine improvisation as musical play and making a spontaneous musical choice, how is that different from composition? Composition is making a musical choice and being able to write it down. Literally (again pun intended) the only step needed is that discovery moment.

And that is why we must begin improvisation in the exploration phase.

By building a rich, varied, and differentiated context of active music making, and therefore visual, kinesthetic, and aural exploration, we’ve had about a million different musical conversations. They get the syntax, they get the sentence structure, they know how to speak it and now they can write it.

So improvisation must happen early and often. If we want our kids to be able to retain what we’re sharing, if we want to truly build from the known to the unknown—they have to know it! Identify, read, write, and SPEAK.

And that speaking piece is improvisation.

The Planning Playbook will help you finally knowing exactly what to teach, when. Get ready to throw “just filling time” out the door and take that first step toward intentional music teaching.

I love spoiling music teachers! By signing up below, you’ll be subscribed to all my insider tips & tricks!